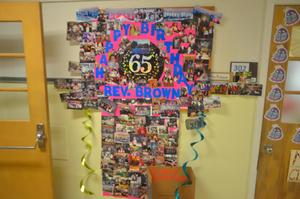 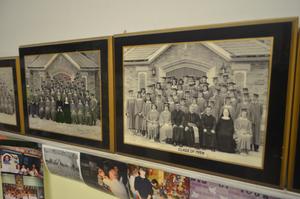 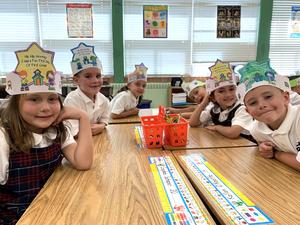 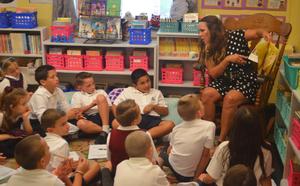 As it celebrates its anniversary as an academic institution on Friday, Reverend Brown has made sure each student and class not only grows in the classroom, but also leaves a legacy that has helped shape the school to what it is today.

SPARTA — When students step into the main hallway at Reverend George A. Brown Memorial School, eyes are always on them.

Lining the walls of the long corridor are black and white and colored photos of each of the classes that have graduated from the Catholic elementary school.

As it celebrates its 65th anniversary as an academic institution on Friday, Reverend Brown has made sure each student and class not only grows in the classroom, but also leaves a legacy that has helped shape the school to what it is today.

“We’re thrilled to be celebrating our school’s illustrious history,” Reverend Brown Principal Patricia Klebez said. “I’m honored to be the principal of Reverend Brown after 65 years of it being open. Reverend George Brown had a vision for this school before it opened in 1954 and to see it still existing as a vibrant, thriving institution that is continuing the mission of what Catholic schools are all about is amazing.”

“It’s wonderful to be associated with Reverend Brown,” Pope John XXIII Regional High School President Monsignor Kieran McHugh said. “It is one of the greatest educational institutions in Sussex County and in the Diocese of Paterson and it is still going strong. It has a lively principal, vice principal, faculty and staff. Reverend Brown has always been on the cutting edge when it comes to the latest movements in academic teachings and technology while never forgetting the core values of our Catholic beliefs. We look forward to continuing to work with the school for the next 65 years!”

As Klebez alluded to, Reverend Brown became the first Catholic school in Sussex County since 1896 when it opened its doors on Sept. 20, 1954. Before the school officially opened, Reverend Brown was going to be a parish school operated under Our Lady of the Lake Church. But, the pastor at the time, Reverend George Brown, had passed away on July 1, 1954 at 55 years old.

With the sad departure of the visionary for the school, Bishop McNulty, the bishop of the Diocese of Paterson at the time, suggested the school be named after Reverend Brown instead of it being named after a parish like every other school in the Diocese. Not only did Reverend Brown’s name live on, but also the mission he helped plan for this school to succeed.

“We are about shaping the whole child academically, socially, emotionally, and physically while wrapping it around our faith,” said Klebez, who is in her fourth year as Reverend Brown’s principal. “I feel very blessed to follow in Reverend Brown’s footsteps. He wanted to positively impact and help students from all over the area and we are still doing that today.”

When the school opened, over 200 children, not only from Our Lady of the Lake, but also from the neighboring parishes of Franklin, Sussex, Ogdensburg, Newton, Branchville, and Milton were registered for their first year of Catholic education under the care and guidance of four Sisters of the Order of St. Benedict. The Benedictine charisma, spirit, and tradition continue to be a part of the school today.

This is due to the dedication of Monsignor Charles C. Cassidy, who was the pastor for Our Lady of the Lake for over 20 years, Monsignor McHugh, who has worked alongside the school while being the president and/or principal of Pope John for the last 49 years, and Rev. David McDonnell, the current pastor at Our Lady of the Lake.

Under their guidance, Reverend Brown has continued to thrive and be a center of Catholic education for students in grades pre-kindergarten through fourth grade.

“It has been a real force in the community,” said Pat Fitzgibbons, whose father was one of Reverend Brown’s closest friends and whose sister and brother both graduated from the school in 1959 and 1964, respectively.  “My family enjoyed its time there and many people in this area love what it has done for their children.”

Lucia McKeeby has witnessed this school’s evolution for the last 39 years while working as a teacher.

“We have miracles happening here all the time,” said McKeeby, who is currently one of three fourth-grade teachers for the school. “When these students come to Reverend Brown, they just blossom. We make our children responsible, independent and successful in what they are here to do. We are always here to help our students, families and community. Reverend Brown is a really special place.”

As the 2019-20 school year gets underway, Klebez said the staff is committed to building upon the vision that was started by all of the leaders before her. Klebez also said she will enjoy talking to the students about the photos of the graduating classes that are on the walls of the main hallway while tying in a reference from the 1989 film “Dead Poets Society,” starring the late Robin Williams.

“I love having that display of history,” Klebez said. “Just like Robin Williams, as the unconventional teacher in the movie, he brings his students into the hallways to view the pictures of the past, asking the students to listen closely as the pictured people whisper their legacies to them.”

“I want the same for our students,” Klebez continued. “There is a long wall of students pictured who came before our current students. If they look and listen closely to those pictured, what are they whispering to our students? I would hope the same message as in the movie, 'Carpe diem.'"