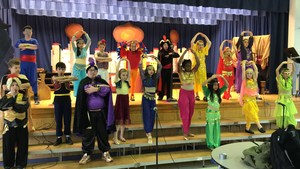 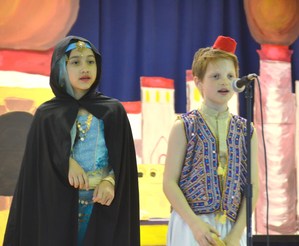 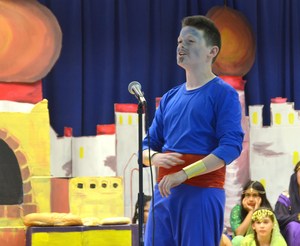 4/26/2018
Fourth grade students at Reverend George A. Brown Memorial School have watched the movie “Aladdin” so many times that they can’t even count anymore. On Saturday, these fourth graders have the task of re-enacting one of their favorite movies of all time when they present the musical version of Disney’s “Aladdin Kids” at 1 and 4 p.m. at McKenna Hall.

SPARTA — Fourth grade students at Reverend George A. Brown Memorial School have watched the movie “Aladdin” so many times that they can’t even count anymore.

They know every part, the main characters, all the costumes, how the characters talk and the overall meaning of the movie.

On Saturday, these fourth graders have the task of re-enacting one of their favorite movies of all time when they present the musical version of Disney’s “Aladdin Kids” at 1 and 4 p.m. at McKenna Hall.

“I love this,” said Reverend Brown fourth grader Serena Lorenzo, who plays Princess Jasmine, the lead actress in the movie. “We get to actually experience what it is like to be in this movie.”

“It’s pretty cool,” said Reverend Brown fourth grader Brady Shust, who plays the role of Genie. “We get to dress up, put on all the face paint, look like the characters and perform this show that we all love in front of our family and friends.”

The students are presenting the musical based on the 1992 animated film in which a poor street urchin, Aladdin, tries to woo the beautiful Jasmine, the daughter of the Sultan of the land of Agrabah, by using three wishes he was granted from Genie. The film won many awards, including two Academy Awards for Best Music, Original Score and Best Music, Original Song, and is currently on Broadway.

In their time preparing for this musical, the students have learned a few lessons about this play. The biggest one is the fact that it is a lot harder to do than it looks on TV or on Broadway.

“You get to be in the shoes of that character,” Lorenzo said. “You realize that you have to know more about them and the movie than you ever thought before.”

“You see how difficult it is to just act out every move and every line that they have to do,” said Tate Elvin, who plays Aladdin.

“I’ve learned that when you watch it on TV, you think, ‘Oh, I can sing every song,’” Shust said. “But when you get on stage and you have to know what all the words are, it’s tough.”

Another thing they have taken away is that they have developed a love of acting.

“It’s fun,” Lorenzo said. “I’ve been playing around with costumes at my house for years. I decided to give it a try this year and now I like it.”

Reverend Brown music teacher and play director Mrs. Deborah O’Brien said the students have worked really hard preparing for this play, which is one of their biggest events of the school year.

“It’s been a lot, but they are on it,” O’Brien said. “For these kids, this is their first real play and theatre expression. They always rise to the occasion and will do so this weekend.”

As they do their last-minute rehearsals and preparations for their two shows on Saturday, the students are looking forward to performing under the bright lights and giving the crowd a great rendition of their favorite movie.

“My family is a big fan of plays,” Elvin said. “My brother Shane played Jesus (in Pope John XXIII Middle School’s production of ‘Godspell’), my sister was Nala from ‘The Lion King’ at a different play. Now, I get to be Aladdin. I can’t wait to show them and everyone what I can do.”

“We are excited,” Lorenzo said. “We love this movie so much. It’s going to be a lot of fun.”

Cost: Tickets are $10 for adults/$5 for students. Children ages 4 and under are free on an adult’s lap. For tickets, please contact katie.elvin@yahoo.com or purchase them at the door.