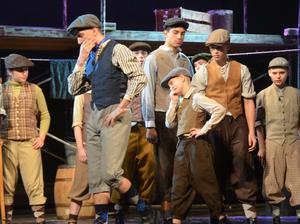 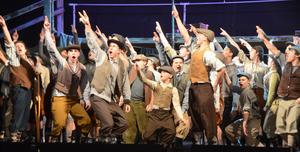 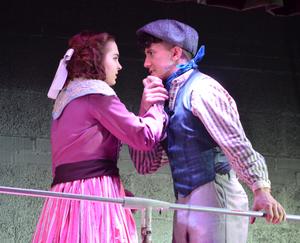 For the next three days, members of the Pope John Players, Pope John XXIII Middle School and Reverend George A. Brown Memorial School will perform in the first musical in which all three schools of the Catholic Academy of Sussex County are represented.

SPARTA — The Pope John Players always look to raise the bar for the program and for theater at Pope John XXIII Regional High School.

This week, this group will be a part of history while putting on the fall production of “Newsies: The Musical” at Pope John.

For the next three days, members of the Pope John Players, Pope John XXIII Middle School and Reverend George A. Brown Memorial School will perform in the first musical in which all three schools of the Catholic Academy of Sussex County are represented. The musical will be presented Thursday at 7 p.m., Friday at 8 p.m., and Saturday at 2 and 7 p.m., at Pope John XXIII Regional High School.

The show is open to the public and tickets cost $10 per person. Area senior citizens are admitted free of charge.

“It’s very important that we are doing this,” Pope John senior Hayley Gagnon said. “There are so many schools around the country that don’t think theatre is important. The fact that our administrators and faculty believed it was so important to the point that we should involve kids from every single grade in our Academy is incredibly special. To be a part of this for our school for the first time is magical.”

“This is going to be an amazing experience,” Pope John senior Chase Nugnes said. “With all the different age groups and having such a big cast like this, it’s riveting to be a part of something of this magnitude for our schools.”

The Pope John Players are putting on the Disney version of “Newsies: The Musical,” which was released in 2017 and was based on the 1992 musical film, "Newsies.” The musical film was inspired by the real-life Newsboys Strike of 1899 in New York City in which a group of newsboys in Long Island City turned over a distribution wagon for the New York Journaland declared a strike against the papers of Joseph Pulitzer, publisher of the New York World, and William Randolph Hearst, publisher of the Journal, until prices were rolled back.

Nugnes plays the role of Jack, who in the musical leads the group of newsies — a mixture of Pope John High School, Pope John Middle School and Reverend Brown students. Gagnon plays the role of Crutchie, who is a disabled newsie and friend to Jack. Pope John freshman Declan McHale and Pope John Middle School fifth grade student Tate Elvin play the roles of Davey and Les, who are brothers who have to work for their family because their father suffered a work-related accident that resulted in termination of his employment.

While the Pope John Players are talented enough to put on a musical like this, director Jacquelyn Burt got the idea to incorporate students from the middle school and Reverend Brown to make it an Academy-wide production.

“We are so thrilled to present this,” Burt said. “We are an Academy now and we have in years past used some students from either the middle school or Reverend Brown, but some parents asked about having their children from all schools participate in a show together. So, I put it out there and we had an amazing turnout.”

Burt’s not kidding, as the cast is made up of 146 students and faculty/staff members — the largest cast for one single Pope John Players’ production. With such a big number of cast members, there were obstacles that the Pope John Players had to overcome.

“It posed all sorts of new challenges,” Burt said. “You had to get your thoughts across to a group of actors and actresses that ranged from ages 6 to 66 years old. You also had to make sure that safety was the first priority because you have 106 students on the stage at one time plus some students doing tumbling and rolling. Those were big things we had to do, but the kids have been great.”

A big reason they met those challenges was because each Pope John Player was a mentor to a middle school or Reverend Brown student. Each time the cast would gather for practices, the students would not only work together on their lines and choreography, but they also get to know each other so that they could develop relationships together.

“Developing a relationship with everyone is important,” said Pope John eighth grade student Matthew Compa, who plays the role of Race — a fellow newsie who is a key member of the group.  “If we can’t develop a relationship off the stage, then it is really hard to develop one on stage.”

“This helped out,” McHale said. “Since I was the older brother of Les in the musical, I could easily relate to him. We now have a close bond together.”

“He was really nice,” Elvin said of Declan. “He’s welcoming to everybody and is great to everyone. It helped a lot.”

“It was cool,” said Reverend Brown fourth grade student Nora Marino, who is a newsie in the musical. “They showed us the ropes on what to do. It was like having a big brother or big sister.”

Because of the camaraderie it has developed as a group, the entire cast is excited to take the stage and not only show off their talents, but start a new chapter in the history of Pope John Players’ productions.

“Doing shows at school is a gift,” McHale said. “Having the middle school kids and the Reverend Brown kids be involved as well shows them how important theatre is in their lives and they can help it live on.”

“This is getting people in this school and in the academy interested in theatre,” DiBernadino said. “It’s just amazing.”

“I love that we are including everyone in this,” Young said. “When I was in elementary and middle school, we didn’t have a theatre program. There are so many kids here that love theatre. It’s a nice opportunity for us to showcase that.”